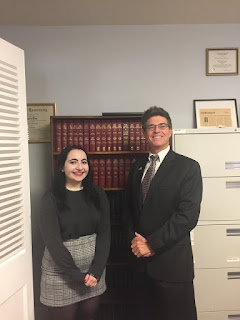 Veteran's Day -
1. Free Estate Planning consults for Veterans for November Veterans month.  Call us to schedule a consultation. 732-572-0500 between the hours of 9am-5:30pm, Monday through Friday.
Local military veterans will be holding services and other events this week to commemorate Veterans Day. The holiday, originally called Armistice Day, was created to honor veterans of World War I. The armistice effectively ending the war was signed on Nov. 11, 1918.   Congress passed legislation setting Nov. 11 as a day to honor American veterans of all wars.
While in college I wrote my senior class project on my grandfather Albert Louis Vercammen who fought in WWI against the German army with the Belgian Army. I wrote how he single handedly defeated the Germans to make the world safe for democracy. I hope to travel to Belgium in the summer of 2019 to see the site of the Battle of the Yser River and other areas my grandfather served.
Decades later, the Red Chinese stormed into North Korea in the Korean War and threatened Communism throughout Asia. The Army summoned my dad, Albert P. Vercammen, to go over and fight the invaders. He was on the Battleship New Jersey crossing the Pacific when the North Koreans and Chinese heard about the fierce Vercammen fighting spirit. The North Koreans started to retreat and wanted to surrender. The cowardly United Nations let them call it a truce. Again, the world was safe for democracy.
While in Korea, Al Vercammen was promoted to Sergeant. I recall him saying Korea was the coldest place in the world. Also, unlike the TV show MASH that had attractive nurses, the nurses in Korea were all ugly. The black and white photos taken in Korea my Dad has show barren hills near their Spartan tents. It looked cold. I am glad I did not have to go over there. So as Americans, we thank our Dads and other vets that got the call to duty [draft] and helped turn the tide against the Communists.
My father in law John Bachenski served in WWII in the Army Air Corp, the forerunner of the Air Force. He helped start the sonar radar program for the Army. He successfully helped defend the air base at Boca Raton, Florida from the invading Italian navy. He is a long time member of the American Legion.
2. Veterans & Sons of Veterans should Join the American Legion
To honor my dad and other veterans I recently joined the Sons of American Legion. I am now am an Member, Sons of American Legion, Edison Father & Son Post 435, which is located on 43 Oakland Ave, Edison, NJ 08817 near Plainfield Ave and Wick Plaza.
Full Membership is open only to men and women who served active duty in the US Armed Forces during specific periods designated as "war time" by the US Congress, and who have received an honorable discharge, or are still serving honorably. Eligible veterans would be able to provide a Form DD214 (or similar) to verify their eligibility. If you don't meet these requirements, you can still support the USA and Posts of the American Legion.

It's possible that you may be able to join one of the other organizations in the "Legion Family." The Sons of The American Legion (SAL) is comprised of male descendants, adopted sons and stepsons of American Legion members. (There are no age limitations.) Many posts have an active SAL program and you can contact one near you to learn more. (Visit www.legion.org/sons for more information.) I joined as a SOL.

Their sister organization is the American Legion Auxiliary. Eligibility is open to mothers, wives, daughters, sisters, granddaughters, great grand daughters, or grandmothers of members of The American Legion, or of deceased veterans who served in the United States Armed Forces during the listed war eras.
https://www.facebook.com/American-Legion-Father-Son-Post-435-474025345951817/
The American Legion was chartered and incorporated by Congress in 1919 as a patriotic veterans organization devoted to mutual helpfulness. It is the nation's largest wartime veterans service organization, committed to mentoring youth and sponsorship of wholesome programs in our communities, advocating patriotism and honor, promoting strong national security, and continued devotion to our fellow service members and veterans.

Hundreds of local American Legion programs and activities strengthen the nation one community at a time. American Legion Baseball is one of the nation's most successful amateur athletic programs, educating young people about the importance of sportsmanship, citizenship and fitness. The Operation Comfort Warriors program supports recovering wounded warriors and their families, providing them with "comfort items" and the kind of support that makes a hospital feel a little bit more like home. The Legion also raises millions of dollars in donations at the local, state and national levels to help veterans and their families during times of need and to provide college scholarship opportunities.
To contact the American Legion, Edison Father & Son Post 435 Call (732) 985-9768. Hall Rental also available for events
More details at: http://www.legion.org/membership/faq
3.  Reasons to sign a Power of Attorney
A Power of Attorney allows your spouse or another person to administer your assets during your lifetime, either upon disability or now.  The lack of a properly prepared and executed Power of Attorney can cause extreme difficulties when an individual is stricken with severe illness or injury rendering him/her unable to make decisions or manage financial and medical affairs. More info at http://www.njlaws.com/power_of_attorney.html
In the absence of a Power of Attorney or other legal arrangement to distribute property if you become disabled, your family or partner cannot pay your bills or handle your assets. The result can be lengthy delays.

The term "durable" in reference to a power of attorney means that the power remains in force for the lifetime of the principal, even if he/she becomes mentally incapacitated. A principal may cancel a power of attorney at any time for any reason. Powers granted on a power of attorney document can be very broad or very narrow in accordance with the needs of the principal.
New Jersey has a detailed, expensive legal procedures, called Guardianships or conservatorships, to provide for appointment of a Guardian. These normally require lengthy, formal proceedings and are expensive in court. This means involvement of lawyers to prepare and file the necessary papers and doctors to provide medical testimony regarding the mental incapacity of the subject of the action.

The procedures also require the involvement of a temporary guardian to investigate, even intercede, in surrogate proceedings. This can be slow, costly, and very frustrating.   Advance preparation of the Power of Attorney could avoid the inconvenience and expense of guardianship proceedings. This needs to be done while the principal is competent, alert and aware of the consequences of his / her decision. Once a serious problem occurs, it is usually too late.
The Power of Attorney can be effective immediately upon signing or only upon disability.

Most people who give a Power of Attorney to someone else do it with the thought that if they should become ill or incapacitated or if they should travel, the Power of Attorney will permit the holder of it to pay their bills and to handle all of their affairs for them as limited in the Power of Attorney.
4.NJ Driver had to pay surcharge based on Illinois DWI. Koscinski v. New Jersey Motor Vehicle Comm. unreported
Koscinski was convicted of driving while intoxicated, his first conviction of such offense. Three years later, appellant was charged in Illinois for the same offense. The sentence the Illinois court imposed was that appellant "continue counseling in New Jersey" and pay a fine of $750. Both states were members of the Interstate Driver License Compact, which required party states to impose penalties upon licensed drivers who have been convicted of specific offenses in other states.

After receiving a record of the Illinois conviction, respondent issued petitioner a notice of suspension. Respondent denied appellant's request for a hearing finding none of the factual or legal issues asserted warranted such a proceeding and ordered his license to be suspended. Subsequently, appellant informed respondent that he received a notice that respondent intended to increase the monthly payment toward the surcharge it imposed as a result of the Illinois conviction and requested a hearing. Respondent issued a written decision in which it pointed out N.J.S.A. 17:29A-35 required a specific assessment when a New Jersey driver had been convicted of driving under the influence of alcohol.
On appeal, the court affirmed rejecting appellant's argument that respondent was without authority to impose a surcharge or an increase in the surcharge because he had previously paid a fine to the Illinois court in connection with that conviction. Under the Compact, appellant was subject to punishment in both states for driving while intoxicated. Moreover, appellant failed to identify any material facts that were in dispute, which would otherwise require a hearing. Accordingly, the court affirmed. Source NJLJ Daily Briefing
https://www.law.com/njlawjournal/almID/1518660613NJA006516
5. Next community events
November 13, 2018 Sayreville Public Library
Wills & Power of Attorney Seminar at 6:30pm
free & open to the public
November 15, 2018 NJAJ  Meadowlands
https://www.nj-justice.org/index.cfm?pg=Meadowlands
Veteran's month programs:
November 27, 2018 Woodbridge Library at 7pm
Wills, Estate Planning & Probate Seminar free & open to the public
November 28, 2018 VFW Asbury Park Post 1333
Wills, Estate Planning & Probate Seminar at 6pm -free & open to the public
Fun Upcoming Running Races & Charity events
If you are attending any of these charity races, please call or email Ken V. at Kenv@njaws.com Often we car pool from East Brunswick /Edison or meet at these events. I update this list at http://vercammensport.blogspot.com

Posted by Vercammen Law at 9:36 AM